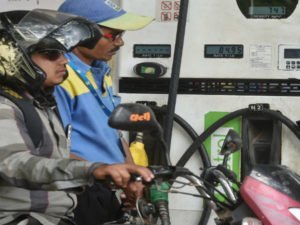 New Delhi, Oct 5: A day after Centre’s appeal, the Bihar government on Friday reduced the prices of petrol and diesel by Rs 2.52 per litre and Rs 2.55 per litre respectively. Meanwhile, Chandigarh Administration reduced the prices of petrol and diesel by Rs 1.50 per litre.
On Thursday, the Centre had announced a cut in the petrol and diesel prices by Rs 2.50 per litre. [Day after Centre’s appeal, Maharashtra govt cut diesel prices by Rs 1.56 per litre] Following Jaitley’s announcement, most of the key BJP ruled states such as Maharashtra, Gujarat, Uttar Pradesh, Tripura, Jharkhand, Chattisgarh, Madhya Pradesh and Himachal Pradesh also announced an additional cut of Rs 2.50 per litre on petrol and diesel bringing the effect reduction to Rs 5 per litre on fuel prices. [Govt cuts fuel prices by Rs 2.50, Congress calls it panic reaction ahead of polls] However, Delhi, Punjab and West Bengal were among the few states who did not announce any cut in the fuel prices following Centre’s appeal. Fuel prices were witnessing a steep rise since the past few weeks. Despite the prices of petrol and diesel touching record highs with continuous hikes, the Central government skirted questions on whether it is considering a tax cut on imported crude to bring down the prices.