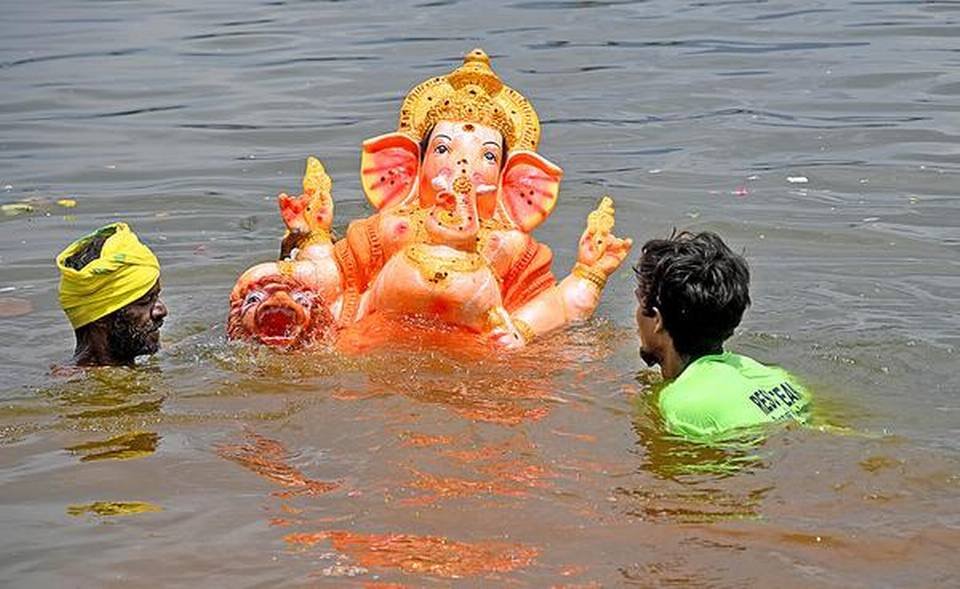 Despite conducting various awareness activities and introduction of eco-friendly Ganesha idols, more than 95% of the idols installed at public places and those venerated by individuals in houses and other places in Coimbatore were made of non-biodegradable plaster of paris (PoP).

Volunteers involved in clearing the remains of immersed idols in various tanks and rivers in Coimbatore on Wednesday and Thursday said that they stumbled upon very few eco-friendly idols made of materials such as clay and paper pulp, which accounted for less than 5% of the total idols immersed.

On Wednesday, a total number of 1,509 large idols installed in public places were immersed in various waterbodies in the district.

“Of the total number of idols immersed in Chinnar at Chadivayal on Wednesday, only four or five idols, that too small ones, were made of clay. All the other idols were made of PoP,” said G. Ramkumar of Siruvani Vizhuthugal, a voluntary organisation working to protect Noyyal.

He said that the coordinators of the organisation – Sakthivel, Sivakumar, Janakiraman and volunteers cleared remains of around 200 Ganesha idols made of PoP from Chinnar, a major tributary of Noyyal.

Meanwhile, there were no volunteers to clear the remains of PoP idols in immersion sites such as river Bhavani near Mettupalayam, Aliyar near Pollachi, Sulur tank, Kuniyamuthur tank and Kurichi tank.

Coordinator of an organisation involved in tank restoration in Coimbatore city said that the water level in Kurichi tank was much higher than that of last year, posing a risk for volunteers in removing the remains of PoP idols.

The sale of PoP idols thrived this year with authorities, including the district administration, hardly taking any steps to enforce the guidelines issued by the Madras High Court regarding the conduct of Vinayaka Chathurthi celebrations and ban Ganesha idols made of PoP in 2017.

R. Raveendran of the Residents Awareness Association of Coimbatore said that a joint action plan involving various non-governmental organisations was required to prevent the manufacture and sale of PoP idols ahead of Vinayaka Chathurthi, next year.

“Very few artisans are engaged in the making of idols. We have to identify them well in advance and create awareness among them on the need for making eco-friendly idols. A meeting should also be conducted for those installing large idols in public places and advise them to go for idols that do not harm the environment,” he said.

The police have allotted timings and locations for the immersion of around 400 idols across Coimbatore on Friday.