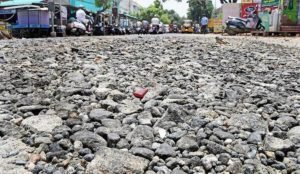 The road has remained in this condition for a few months now and turned worse during the recent rain, complains commuter K. Shriram, who uses the road every day to reach office.

Being an important link road connecting Ponnaiahrajapuram with Selvapuram and one that leads to Kovaipudur, it is imperative that the Coimbatore Corporation repairs the road at the earliest, he says.

The road measuring a little over a kilometre was damaged over six months ago when the Corporation took up works to provide house service connection from the main underground sewer line.

And recently stretches of it were damaged when the Corporation again dug the road to undertake some work, putting the road users into difficulty, rues shopkeeper M. Rahim.

The damaged stretches have been the reason for many commuters losing balance while riding two-wheelers and falling. This had happened for several parents who use the road to drop their children in the schools in the area, says Chokkampudur resident R. Marimuthu.

They want the Corporation to repair the road at the earliest, at least before the North East Monsoon season.

A civic body official in-charge of road, which falls in Ward 77, says the Corporation will soon repair the road by giving it a fresh layer of bitumen. The road and a few other roads in Selvapuram are part of a road repair package costing ₹ 2 crore.

But before taking up the work, the Corporation wanted the residents to avail of the house service connection so that no digging would take place once the road was re-laid. Many residents had availed of the scheme. Likewise, the Corporation also wanted to lay a water pipeline before digging the road for repair. The pipeline work too was complete and the road work would begin in the next few days.