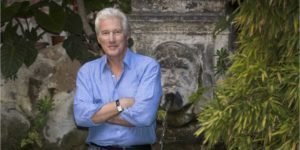 “A very special moment just a few minutes ago Getting blessings for our precious to come,” she captioned a photo of her with the Dalai Lama and Gere in Rotterdam in the Netherlands.

The actor, who is a Buddhist, and the spiritual leader are both bowing and placing their hands on her baby bump.

“We couldn’t announce it before telling HH Dalai Lama,” she quipped.

The couple have been sparking baby speculation since August, when Spanish outlet ABC reported that Silva was pregnant.

Gere and Silva had secretly wed on April 23 after more than three years of dating.