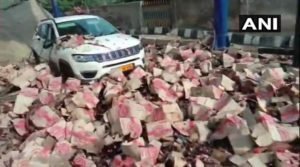 A toll booth in Rajasthan’s Kishanganj on the Jaipur-Ajmer highway was splashed in beer as a truck carrying cartons filled with beer bottles rammed into the structure on Friday, ANI reported. At least one person was injured in the accident. A video footage of the incident showed a speeding truck crash into the toll booth, which was wrecked due to the impact of the hit.

As the truck slammed into the structure, there was a splash of beer all over the place and a large number of cartons were strewn across the site of the accident. The truck was also severely damaged and parts of the vehicle could be seen lying around.

Another vehicle, which was crossing the toll booth ahead of the truck, was damaged in the accident. The police arrived at the scene following the mishap.