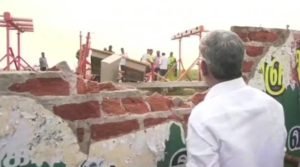 An Air India Express flight to Dubai with 136 passengers on board had a close shave when it hit the Air Traffic Control compound wall at Trichy international airport during take-off on Thursday, news agency ANI tweeted.

All passengers were reported to be safe. The aircraft suffered damages under the belly and was diverted to Mumbai’s Chhatrapati Shivaji International Airport where it was declared unfit for operations following an inspection. In a statement, Air India Express said a separate aircraft was arranged from Mumbai to fly the passengers to Dubai.

Air India Express also said that an internal inquiry has been set up to probe the incident and both the pilot and co-pilot have been de-rostered until the investigation is completed. The airline has also informed the directorate general of civil aviation (DGCA).