The grim milestone comes as the WHO calls South America ‘a new epicentre’ of the deadly virus.

Brazil has confirmed more than 330,000 cases of the coronavirus, surpassing Russia to become the nation with the second-highest number of infections, behind only the United States.

The grim milestone on Friday came as the World Health Organization (WHO) called South America “a new epicentre” of the deadly virus, with the WHO’s emergencies director, Mike Ryan, expressing most concern for Brazil.

“In a sense, South America has become a new epicentre for the disease. We have seen many South American countries with increasing numbers of cases,” Ryan told a virtual news conference.

“Clearly there is a concern across many of those countries, but clearly the most affected is Brazil at this point,” he said.

Brazil registered 1,001 daily coronavirus deaths on Friday, taking the total deaths to 21,048, according to the health ministry.

However the true number – of both cases and deaths – is likely higher as Latin America’s top economy has been slow to ramp up testing. 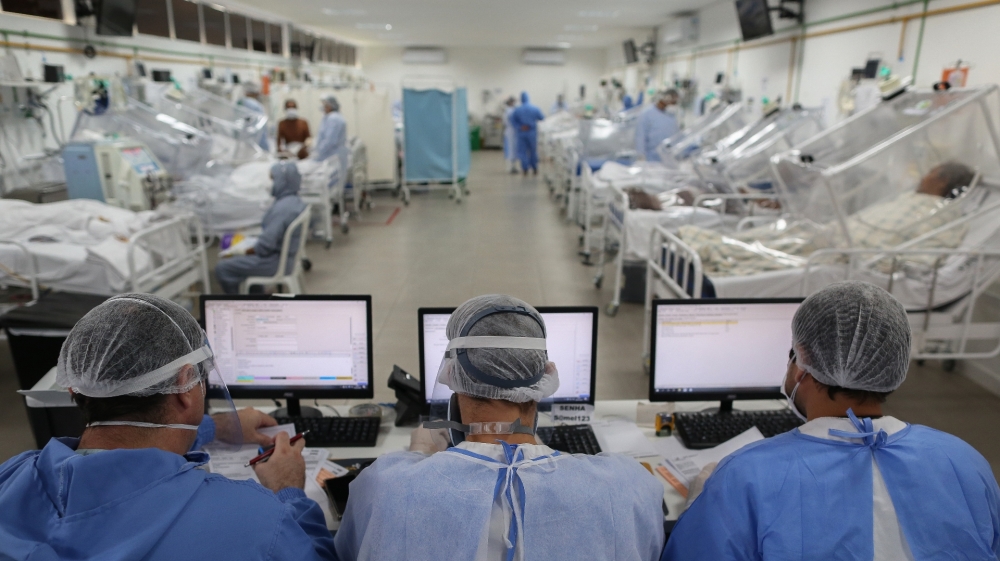 The death toll has doubled in just 11 days, according to the ministry’s data. “The majority of the cases are from the Sao Paulo region,” Ryan said.

“But in terms of attack rates, the highest attack rates are actually in Amazonas: about 490 persons infected per 100,000 population, which is quite high,” he said of Brazil’s vast northwestern state.

Brazil’s health ministry has recommended using the anti-malarial drugs chloroquine and hydroxychloroquine to treat even mild cases of COVID-19 – treatments President Jair Bolsonaro has pushed for despite the lack of conclusive evidence of their effectiveness.

An analysis published on Friday in the medical journal The Lancet found that patients treated with the drugs had a higher risk of death when compared with those who had not been given these medicines.

Ryan stressed that neither hydroxychloroquine nor chloroquine has been proven to be effective in the treatment of COVID-19 – or in prophylaxis against the disease.

The two drugs are among a handful involved in WHO-coordinated clinical trials to find effective treatments for the disease. Some 3,000 patients are taking part in the trials in 320 hospitals across 17 countries.

“Our current clinical and systematic reviews carried out by the Pan American Health Organization, and the current clinical evidence, does not support the widespread use of hydroxychloroquine for the treatment of COVID-19 – not until the trials are completed and we have clear results,” said Ryan.