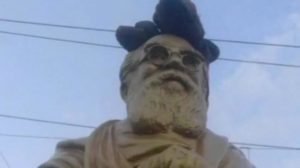 A man, who hurled a pair of shoes at the statue of Dravida Kazhagam founder and social reformer EV Ramasamy (Periyar) was arrested by the police on Monday.

Many political leaders had come to pay their tributes to the leader on the occasion of his 139th birth anniversary. However, a motorcyclist hurled his shoes at the shoe when the members of Viduthalai Chiruthaigal Katchi (VCK) were paying tributes.

VCK party members immediately nabbed the accused after which a minor scuffle broke out at Mount Road. The police took the accused into custody for questioning. The accused, Jagadessan, is an advocate by profession and is reportedly a Bharatiya Janata Party (BJP) supporter too.

Condemning the act, Fisheries Minister D Jayakumar said that a strong action will be taken against the miscreants as “an insult to Periyar is an insult to Tamils.”

Meanwhile, another incident of vandalism was reported in Tiruppur. A Periyar statue located in Tiruppur was vandalised by unidentified men. The miscreants chiseled off a portion from the statue’s head and placed a pair of footwear atop it. The matter is currently under investigation.