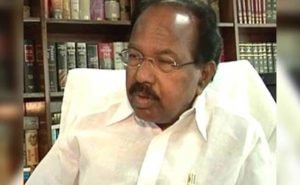 The N Chandrababu Naidu-led Telugu Desam Party or TDP is welcome to join the UPA for the cause of a united fight against the NDA, senior Congress leader M Veerappa Moily said today.

The TDP is currently engaged in seat-sharing talks with the Congress for the December 7 Assembly elections in Telangana, which was carved out of Andhra Pradesh in 2014.

The TDP broke away from the NDA earlier this year over the Centre’s refusal to grant special category status to Andhra Pradesh.

In an interview to news agency PTI, Mr Moily said the idea was to bring all the opposition parties together to unitedly fight the BJP-led NDA.

He was responding to a query if the electoral alliance in Telangana would continue for next year’s Lok Sabha elections.

On whether TDP, headed by Andhra Pradesh Chief Minister Naidu, is welcome to join the UPA, the former Union Minister said, “Naturally. We would like to have proper understanding between the Opposition. This (TDP) is one such opposition party”.

“It’s a good signal. This is going to help”, added Mr Moily, who had served as the AICC in-charge of party affairs in the undivided Andhra Pradesh, on TDP’s electoral pact with the Congress for the Telangana polls.

“…the gentleman (Rao) who has been heading (Telangana) is most ungrateful fellow,” he said and claimed that Mr Rao became the Chief Minister following the “sacrifice” made by the Congress in terms of conceding the demand for separate statehood for Telangana.

“But he (Mr Rao) does not remember at all. He has bad-mouthed our leader. I don’t think people of Telangana will forgive him,” Mr Moily said referring to Mr Rao describing Congress President Rahul Gandhi as the “biggest buffoon” of the country.

Referring to upcoming Assembly elections in five States, he claimed that the Congress is certain to bag Rajasthan, Madhya Pradesh and Mizoram, and it would not be a surprise if it wins in Chhattisgarh.

“Since there is a proper ‘ghatbandhan’ in Telangana (where the Congress is in the process of finalising seat-sharing deal with TDP, TJS and CPI), we are also going to win there”, he claimed.

Once the “graph of BJP is down” in all these states, it will be writing on the wall for that party and it will not return to power at the Centre, Mr Moily claimed.