With the relaxation of the COVID-19 lockdown in Coimbatore district, the Coimbatore Division of Tamil Nadu State Transport Corporation (TNSTC) began operations of six buses for government employees on Monday. 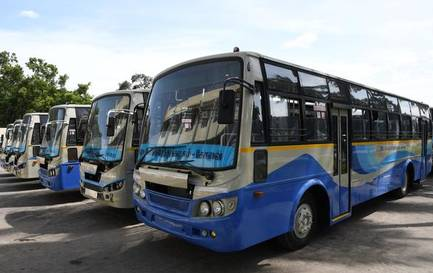 According to TNSTC officials, the buses were operated from Pollachi, Mettupalayam, Annur, Karumathampatti, Vadavalli, and Theethipalayam. These buses were exclusively for around 120 employees working at the Collectorate.

With 16 buses already in operation in the city for the conservancy workers, a total of 22 buses are currently operated in TNSTC’s Coimbatore Zone for government employees, according to the officials. As per the State government regulations to curb the spread of COVID-19, a maximum of only 20 passengers will be allowed in a bus. Masks are mandatory for all those inside the bus, including the drivers and conductors. Upon checking the identity card of the employees, the conductor will provide hand sanitisers to them after boarding the bus.

The employees are required to pay the ticket fare using cash, which is the usual fare collected in the given routes, officials clarified. The bus services are not point-to-point services and will stop at particular boarding points as per the information provided by the district administration.

No requests from Erode, Tiruppur and the Nilgiris Zones have been made for operation of buses for government employees as of Monday. In Coimbatore Zone, the buses are operated only for the employees and not for the general public , the officials noted.

Meanwhile, Tiruppur Collector K. Vijayakarthikeyan announced on Monday that five TNSTC buses will be operated for Collectorate employees from Tuesday.

The buses will start from Udumalpet, Kangeyam, Avinashi, Dharapuram and Perundurai.