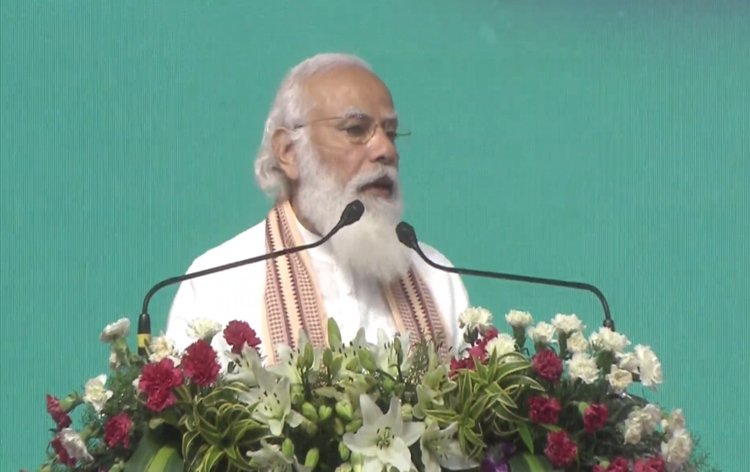 Prime Minister Narendra Modi was speaking at a function in Coimbatore’s Codissia Trade Fair Complex, after inaugurating a slew of infrastructure and housing projects for western and southern regions of Tamil Nadu worth over Rs 12,000 crore.

Mr. Modi said one of the basic needs for the industry to grow is a continuous power supply and he was happy to dedicate to the nation two major power projects and lay the foundation for one more power project.

Mr. Modi called Coimbatore a city of industry and innovation and added the development works that are being unveiled today will benefit Coimbatore and entire Tamil Nadu.

Speaking on the modernisation of the Bhavanisagar dam, he said this will irrigate over 2 lakh acres of land and would benefit farmers in the state.

During his speech the Prime Minister recalled the words of Wisdom of Saint Thiruvalluvar which said farmers are the ones who truly live and all others live because of them, worshipping them.

The Prime Minister said Tamil Nadu has a glorious history of sea trade and port-led development and he was happy to launch various projects related to V. O. Chidambaranar (VOC) Port, Tuticorin. He recalled the efforts of great freedom fighter  Chidambaranar and said his vision for vibrant Indian shipping industry and maritime development inspired the country greatly.

Mr. Modi said the projects launched today will further strengthen cargo handling of the port. It will even support the green port initiative. Apart from this, we will take further steps to make port into a big transhipment port in the east, he said.

The Prime Minister said, whenever ports are more efficient, it contributes to India being Atmanirbhar and a global hub for trade as well as logistics. “About 575 projects at a total cost of over Rs 6 lakh crores have been identified for implementation during the 2015-2035 period. These works cover ports modernisation, new port development, port connectivity enhancement and coastal community development,” he added.

Emphasising that development and care for the environment are closely linked, PM Modi said the VOC port has already installed 500 KW rooftop solar plant. He said helt happy that  VOC Port has taken up a grid-connected 5 MW ground based solar power plant at a cost of Rs 20 crores.

The Prime Minister said at the core of development is ensuring dignity to every individual and one of the ways to provide dignity is to provide shelter to every one. To give wings to dreams and aspirations of people, PM Awas Yojana was started and he said he felt privileged to inaugurate 4,144 tenements that will be handed over to those who never had a roof over their
heads even after 70 years of Independence.

He was given a traditional welcome by dancers in colourful costumes and chenda mela.