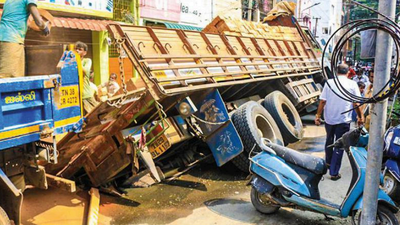 COIMBATORE: Road caved in on Devangapettai Street at Poo Market on Wednesday morning as it couldn’t bear the weight of a truck that was overloaded with bricks. The truck was also trapped on the caved-in road.

A city corporation officer said the truck, which came from Bengaluru, had skipped the main road to evade police and taken to streets to reach a hardware shop at RS Puram.

K Srihari, 23, a resident of Devangapettai, said, “As soon as it entered Devangapettai Street at Poo Market at 11am, the road caved in, damaging the underground drainage pipeline beneath it. The truck tilted to its left side and got stuck on the caved-in road.”

He said the truck driver had abandoned the truck and escaped from the area when they alerted police.

The truck owner, however, arrived on the spot in the afternoon after police warned to confiscate the vehicle. “Another vehicle was brought to load the bricks and remove the truck from the street,” he said.

The city corporation official said the soil beneath the road had loosened because of the incessant rain over the past few days. “As such, the road could not withstand the weight of the overloaded truck. We are planning to impose a fine on the truck owner for damaging the underground drainage pipeline.”