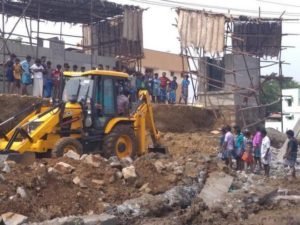 In a tragic accident, 69 sheep and three goats were crushed to death after a compound wall of an under-construction temple collapsed following heavy rain at Sengamalanachiyarpuram near here on Saturday.

The police said that S. Murugan (39) of Gangapuram had brought the animals for grazing. Sivakasi and its surrounding areas experienced heavy rain accompanied by thunder and lightning on Saturday evening.

Mr. Murugan had guided the animals near the Kannan Temple, that was under construction, in the evening.

The 10-foot-high compound wall of the temple, measuring over 50 feet, suddenly collapsed and the animals that took refuge near it from the showers were crushed to death.

Revenue officials, led by Sivakasi Tahsildar, R. Paramanandarajan, retrieved the caracasses of the animals after removing the debris on Sunday morning.

Veterinary doctors from the Department of Animal Husbandry conducted the postmortem.

They were buried in a huge pit dug on a government poramboke land, the tahsildar said.