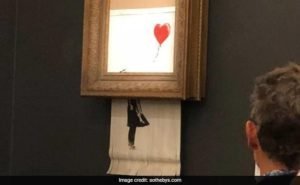 Pablo Picasso once called painting “a sum of destructions.” Banksy, the anonymous British graffiti artist and popular provocateur, admitted he had Picasso in mind when he pulled off the most memorable art-world prank in years.

As millions of people now know, Banksy’s “Girl With Balloon,” a 2006 spray painting on canvas, self-destructed a few moments after the hammer came down on it at a Sotheby’s contemporary art auction in London on Friday. The auction was held in Frieze Week, when collectors from around the world descend on central London for the Frieze art fair.

“Girl With Balloon” had just sold for $1.4 million when an alarm sounded in the auction room. The canvas then began sliding down inside its frame, emerging at the bottom in strips, having been shredded by a remote-control mechanism on the back of the frame.

Kudos to Banksy. What a brilliant way to flip the bird at wealthy collectors, art-world BS and the gawking media: Put one of your own works up for auction; watch the bidding equal an auction record for your work; then, when the hammer comes down, have it self-destruct. 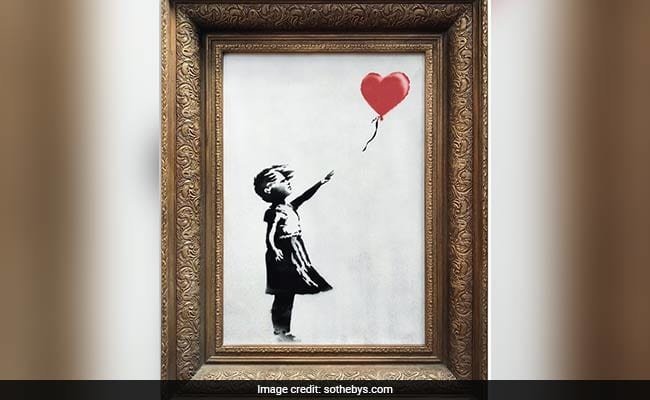 Banksy had outdone himself. But to what end?

“The urge to destroy is also a creative urge,” he wrote, quoting Picasso, in an Instagram post after the event. Picasso was right: Creation and destruction are intertwined. And some things, let’s face it, need undoing.

Destruction has long been a calling card of avant-garde art. With cubism, Picasso and Georges Braque destroyed the idea of conventional likenesses. The artists of the dada and Surrealist movements, scarred by the irrationality of World War I, tried to destroy reason itself. And in 1931, Joan Miro said: “I intend to destroy, destroy everything that exists in painting.”

When it was put to Miro that he still, despite the rhetoric, produced paintings, he replied: “What can I say? I can’t be anything other than a painter. Every challenge to painting is a paradox – from the moment that challenge is expressed in the work.”

It’s easy to imagine Banksy, who does very well in the art market these days, voicing a similar sentiment.

Closer to our own time, Banksy’s compatriot, Michael Landy, shocked the British public when, in 2001, he gathered together all his 7,227 belongings – including his car (a Saab), his toothbrush, his passport and birth certificate, and even art works – disassembled any bigger items, catalogued them, put them on trays on a conveyor belt, and fed them into a machine that smashed, shredded and pulverized them. All this was performed in public, in a storefront in central London.

In many ways, Banksy’s prank feels like a lightweight version of Landy’s work, which was called “Break Down,” and saw the artist destroy works by, among others, his friends Damien Hirst and Tracey Emin (both art-world megastars).

Why lightweight? Only because, although both gestures play into an economy of spectacle, Landy’s revealed an authentic commitment: When “Break Down” was finished, Landy literally had no possessions.

Banksy, we can presume, is doing just fine. His critique of art-world commerce – which deserves all the criticism it gets – has done him no harm at all.

Banksy is a provocateur of genius. But his gestures and gags have a sort of built-in futility, analogous, perhaps, to his painting with the built-in shredder: They are designed only to set tongues wagging. They are not going to change anything.

In fact, it has already been suggested that Banksy’s “Girl With Balloon” will be worth more in its shredded state than it was before. If so, it would be a direct consequence of the artist’s genius for publicity.

What, then, is the real problem here? Is it a system that values art in monetary terms in order for it to be exchanged on the market? Or is it a system in thrall to the currency of publicity and self-promotion?

If it’s the latter, Banksy is deeply implicated.