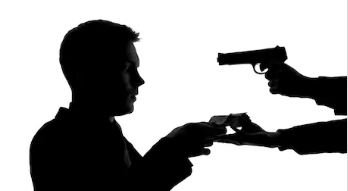 The Saibaba Colony police have arrested a 46-year-old man on charges of threatening a bar owner showing his licensed pistol.

The arrested has been identified as M. Johnson, a resident of KRG Nagar near Ganapathy.

The police said that Johnson had gone to the bar attached to a hotel named JK Hotel run by K. Jayaraj on NSR Road on Friday night. He allegedly picked up a quarrel at the bar and its manager informed the incident to Mr. Jayaraj.

The police said that Mr. Jayaraj went to the bar to enquire about the incident and Johnson threatened him with with the pistol apart from using abusive words against him.

Mr. Jayaraj lodged a complaint with the Saibaba Colony police station and the police booked Johnson for offences under Sections 75 (i) (c) for causing breach of public peace of Tamil Nadu City Police Act, 506 (criminal intimidation) of the IPC read with Section 28 (punishment for use and possession of firearms or imitation firearms in certain cases) of the Arms Act.

He was arrested on Saturday and remanded in judicial custody in Coimbatore Central Prison.

The police said that Johnson, who is said to be into money lending, owned a valid licence to posses the pistol.

The Economic Offences Wing (EOW) in Coimbatore on Saturday arrested a couple, who ran a ponzi scheme and duped several investors.

The police said that they suspect that the couple duped over 1,000 investors of around ₹ 100 crore by collecting money and not giving the promised returns.

Officials with EOW said that S. Sathishkumar (38) and his wife S. Gunavathi (36), residents of Ramalingam Nagar near Saibaba Colony, were arrested on Saturday.

According to officials, the couple ran an investment firm named Dream Makers Global Private Limited in Coimbatore and collected large sums as investments.

They said that the firm offered various investment schemes by offering returns. The firm was paying returns to investors which was stopped abruptly, the police said.

Manoj Kumar, a resident of Uppilipalayam, lodged a complaint against the firm alleging that he was not getting returns for his investment.

The EOW registered a case against the couple and arrested them on Saturday.

The police also seized two cars belonging to the couple. They added that more investors were likely to lodge complaints against the couple following their arrest.