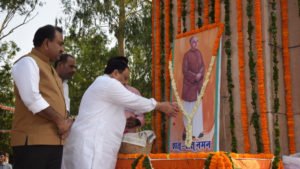 The Centre on Thursday renamed Chenaani-Nasheri Tunnel after Bharatiya Jana Sangh founder Dr Shyama Prasad Mookerjee. The 9.2-km-long tunnel in Jammu and Kashmir is the longest tunnel in the country.

Union Minister for Road Transport and Highways Nitin Gadkari said that the BJP-led government at the Centre decided to renamed the tunnel in honour of Dr Mookerjee because his relentless struggle for “one nation, one flag” has played an important role in “national integration”.

The tunnel was inaugurated in 2017 by Prime Minister Narendra Modi. The bi-directional tunnel, also known as Patnitop tunnel, reduces the distances between Jammu and Srinagar by 30 km.

Gadkari said that PM Modi has sanctioned Rs  7,000 crore for the development of Kashmir since coming to power in 2014. He added that around 2,600 crore has been spent on the construction modern, state-of-the-art Chenaani-Nasheri tunnel. Gadkari expressed confidence that the development of road and infrastructure in Kashmir will help in boosting the tourism in the region.