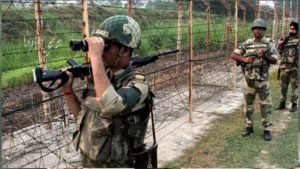 SRINAGAR: In yet another incident of ceasefire violation, the Pakistani troops opened indiscriminate fire in Mendhar sector in Jammu and Kashmir near the Line of Control on Friday.

According to reports, a jawan was injured in the unprovoked and indiscriminate firing by the Pakistani troops.

The Pakistani troops had resorted to firing in the Tangdhar sector of Jammu and Kashmir along the LoC in which woman died and two other civilians were injured.

Pakistani troops resorted to unprovoked firing, resulting in the death and injuries, the Army said.

Properties have also been damaged, the Army sources said, adding the Indian Army has effectively retaliated to the unprovoked aggression from the across the Line of Control.

The woman who died in the firing has been identified as Hamida Fatima, the J&K Police said later.

Last week on Saturday, the Pakistani troops had resorted to firing in Tangdhar to assist infiltration attempts by militants.

Two Indian Army personnel and a civilian were killed and three others were injured.

On Sunday, Army Chief General Bipin Rawat said 6-10 Pakistani army personnel were killed and three terrorist camps destroyed in retaliatory action by the Indian Army across the LoC opposite the Tangdhar sector.