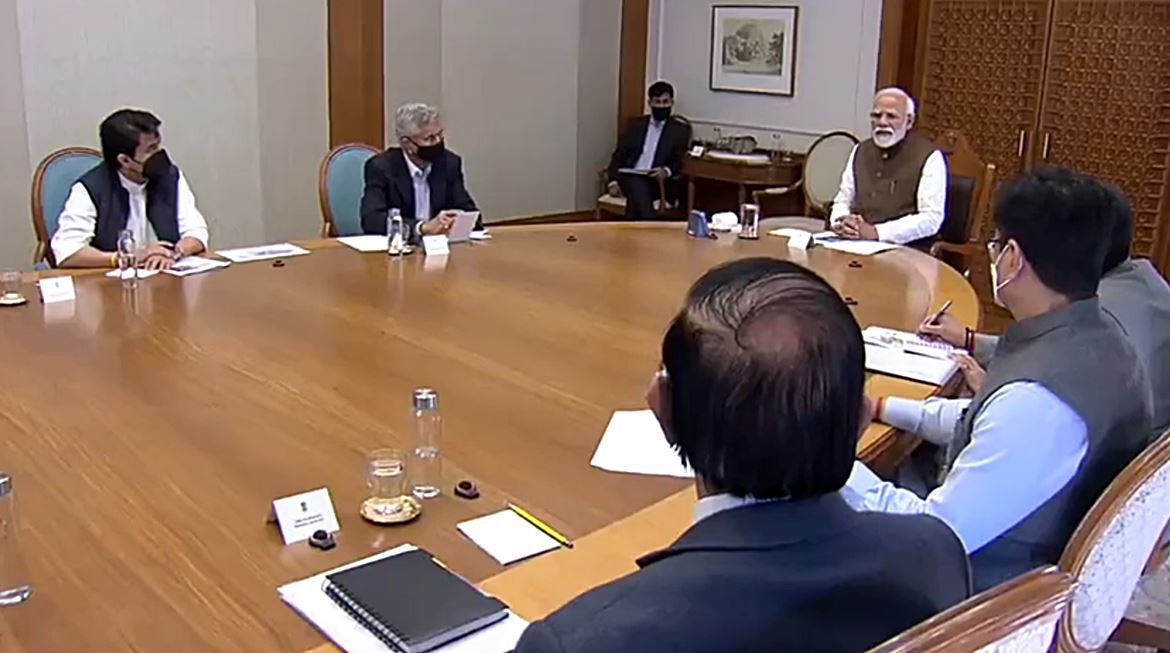 This was announced after a meeting chaired by Prime Minister Narendra Modi who said the “entire government machinery is working round-the-clock to ensure that all Indian nationals there are safe and secure,” according to a statement from the Prime Minister’s Office.

Ramping up diplomatic efforts to evacuate Indian nationals stuck in cities and border points of Ukraine, the government decided Monday to send four Union Ministers to supervise the evacuation, announced plans for more flights to bring back students not just from India but also from neighbouring and developing countries, and send relief supplies to Ukraine as a humanitarian gesture.

This was announced after a meeting chaired by Prime Minister Narendra Modi who said the “entire government machinery is working round-the-clock to ensure that all Indian nationals there are safe and secure,” according to a statement from the Prime Minister’s Office.

Modi also spoke to Prime Minister of Romania Nicolae-Ionel Ciuca and Prime Minister of Slovak Republic Eduard Heger – the two neighbouring countries west of Ukraine, from where India is planning to evacuate its citizens. An important element in the readout of the two phone calls was that Modi “stressed upon the importance of respecting the sovereignty and territorial integrity of nations” – a language first articulated at the UN Security Council, aimed at Russia’s actions in Ukraine.

The PMO statement said the Prime Minister also expressed anguish over the ongoing violence and humanitarian crisis in Ukraine, and reiterated India’s consistent appeal for cessation of hostilities and a return to dialogue. He noted that the “first consignment of relief supplies to Ukraine to deal with the humanitarian situation on Ukraine’s borders would be despatched tomorrow” — Ukraine had asked for help from the Indian government. New Delhi’s decision to send aid to Ukraine assumes significance after its abstention at the UN.

Of the estimated 20,000 Indian nationals who were present in Ukraine, the government said about 8,000 have left the country since its first advisory earlier this month. That leaves approximately 12,000 Indians still there, most of them students in medical colleges.

The decision to send four Union Ministers Hardeep Puri, Kiren Rijiju, Jyotiradtiya Scindia and General (retd) V K Singh was taken during the meeting chaired by the Prime Minister. Puri is heading to Hungary, Rijiju to Slovakia, Scindia will look at Romania and Moldova while Singh will oversee the evacuation in Poland. They will visit these countries as Special Envoys of the Indian government.

“The Prime Minister pointed out that the visit of four senior ministers as his Special Envoys to various nations will energize the evacuation efforts. It is reflective of the priority the Government attaches to this matter,” the PMO said, adding that “guided by India’s motto of the world being one family, Prime Minister also stated that India will help people from neighbouring countries and developing countries who are stranded in Ukraine and may seek assistance”.

So far, Air India has operated six flights from Delhi and Mumbai to Bucharest in Romania and Budapest in Hungary, bringing back 1,396 nationals.

Under the current plan, Air India is further likely to operate one flight from Bucharest on Tuesday and two services from there on Wednesday.

Its low-cost subsidiary Air India Express also saw one of its flights depart Mumbai for Bucharest on Monday. This flight is expected to return to Mumbai with 182 passengers at 9.30 am Tuesday after a refuelling stop in Kuwait.

In addition to the Air India group airlines, IndiGo and SpiceJet have also announced their flights to Europe. IndiGo dispatched aircraft to Bucharest and Budapest via Istanbul as part of the government’s Operation Ganga mission. The flights from Bucharest and Budapest are expected to land in Delhi at 10.30 am and 10.55 am Tuesday, respectively. Both these flights, operated on 222-seater Airbus A321neo aircraft, are expected to make a refuelling stop at Istanbul.

Similarly, a SpiceJet flight also departed for Budapest from Delhi on Monday, and is expected back in Delhi at 1.45 pm on Wednesday. The SpiceJet flight, operated on the 189-seater Boeing 737 Max plane, will make a refuelling stop at Kutaisi in Georgia on its return leg.

In a statement, the airline said: “SpiceJet is planning to operate more evacuation flights and is in discussion with authorities concerned.”

Many Indian students have reached Ukraine’s borders with Poland and Romania. Videos of some of those students, asking for help, have surfaced on social media.

“We are encouraging Indians to move to western Ukraine… But they should not directly reach the borders. They should first reach the nearby towns and take shelter,” Ministry of External Affairs spokesperson Arindam Bagchi. He said the government is closely monitoring the situation in eastern parts of Ukraine such as Kharkiv where the situation remains delicate.

The government has identified an alternate train route to help evacuate the students, from Uzhhorod in western Ukraine to Budapest. A new route through Moldova has also been identified, Bagchi said, adding that weekend curfew in Kyiv has been lifted.

On Monday, the Indian Embassy in Kyiv said “Ukrainians, both civilians and authorities, have been remarkably supportive in facilitating evacuation efforts of Indian citizens, especially considering these critical and dangerous times. You are all requested to respect these sentiments.”