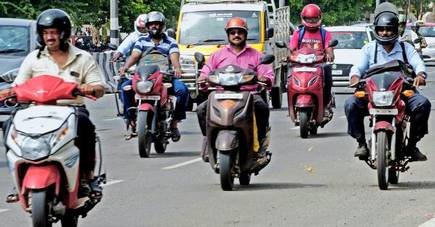 Coimbatore city police have announced traffic regulations in the city on Monday and Tuesday in view of the visit of Chief Minister M.K. Stalin. The Chief Minister will attend government functions at VOC Grounds on Monday and at the Coddissia Trade Fair Complex on Tuesday.

The police said in a release that large numbers of beneficiaries and party workers are expected to attend the functions due to which traffic congestion is anticipated on Avinashi Road and adjoining roads on the two days.

The police have advised students, office-goers and the public to advance their journey and take alternative routes to avoid traffic congestion. People who visit Coimbatore airport, railway station and major bus stands have also been asked to plan their trips conveniently.

Users of heavy vehicles have to get prior permission from the police to enter Coimbatore city limits on the two days.

According to the police, heavy vehicles will not be allowed inside Coimbatore city from 6 a.m. on Monday until further notice.

Vehicles heading to the city from Avinashi Road should take diversions at Thottipalayam Junction and Goldwins to reach Sathyamangalam Road via Kalapatti. Another diversion will be in place at Nava India Junction to reach Mettupalayam Road via SNR College Road and 100 Feet Road.

Vehicles will not be allowed on the stretch between LIC Junction and The Hindu office. Vehicles are not allowed to enter VOC Grounds or LIC Junction from Park Gate Junction and from Dr. Balasundaram Road via ATT Colony.

Buses from railway station to Gandhipuram should pass through Huzur Road, Anna Statue Junction and Dr. Balasundram Road. Vehicles will not be allowed to enter LIC Junction from Huzur Road.

Due to security reasons, public will not be allowed to fly drones in the city limits on Monday and Tuesday, the police said.