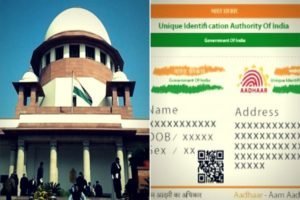 Questions over Aadhaar’s validity were laid to rest on Wednesday as the Supreme Court declared the 12-digit Unique Identification Number as as Constitutionally valid.

The apex court’s five-judge Constitution bench said Aadhaar means unique and it is better to be unique than being best.

Reading out the first of the three judgements, Justice A K Sikri said that there is sufficient defence mechanism for authentication in Aadhaar scheme. Justice Sikri pronounced the judgement for himself, Chief Justice Dipak Misra and Justice A M Khanwilkar.

Here’s what all Supreme Court said in its Aadhaar verdict:

# There is no possibility of obtaining a duplicate Aadhaar card.

# There has been minimal demographic and biometric data collected by UIDAI for Aadhaar enrolment.

# Attack on Aadhaar by petitioners is based on violation of rights, will lead to a surveillance State.