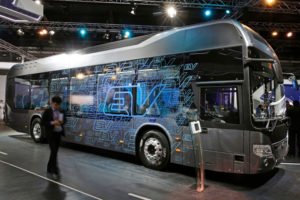 The Tamil Nadu government said it would soon launch 100 electric buses in the state, in collaboration with UK-based C40. Transport Minister M R Vijayabhaskar met a delegation from UK, an official release said. The government decision was part of efforts to minimise carbon emissions. Of the 100 electric buses, 80 would be operating in Chennai and 20 in Coimbatore, the release said.
C40 Cities Finance Facility supports major cities to prepare and deliver climate change projects. It is funded by German Federal Ministry for Economic Cooperation and Development, Government of United Kingdom and United States Agency for International Development.

Recently, Uttarakhand Chief Minister Trivendra Singh Rawat flagged off the trial run of the hill-state’s first electric bus. The test run of the bus– provided by Hyderabad based Olectra Greentech Limited– will go on for a month on the Dehradun-Mussoorie and Haldwani-Nainital routes. The 30-seater low-floor bus is equipped with CCTV cameras, GPS, panic button and air suspension