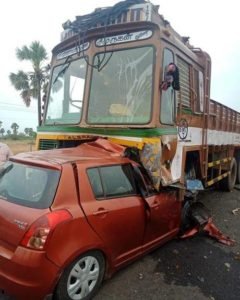 Car driver tried to overtake another vehicle, collided with lorry

Five persons, including a 3-year-old girl, her father and grandfather, were killed when the car in which they were travelling and a lorry collided head-on collision near Alangulam on Tuesday morning.

The deceased were identified as P. Murugan, 52, of KTC Nagar; his son-in-law M. Rajasekar, 35; Rajasekar’s daughter Dhanika, 3; Murugan’s second son-in-law J. Niranjan Kumar, 28 and Murugan’s co-brother, Nambi, 58, of Kalakkad. The police said the wedding of Murugan’s son Mahesh was held on Monday. As the family made preparations for the customary feast on Tuesday, the group went to Adaikkalapattinam, a small hamlet on the Tirunelveli–Tenkasi highway known for selling quality mutton.

Rajasekar, who was behind the wheel, apparently overtook a vehicle as they were crossing Karumpuliyooththu.

The speeding car hit a lorry coming in the opposite direction.

All five were killed on the spot around 6.15 a.m. After a struggle for over 45 minutes, the police retrieved the bodies from the mangled remains of the car.

The bodies were sent to the Tirunelveli Medical College Hospital for post-mortem. The Alangulam police have registered a case and picked up lorry driver Ganeshkumar, 28, of Uraiyoor in Tiruchi for interrogation.

The Tirunelveli–Tenkasi highway is one of the busiest thoroughfares in the southern region.