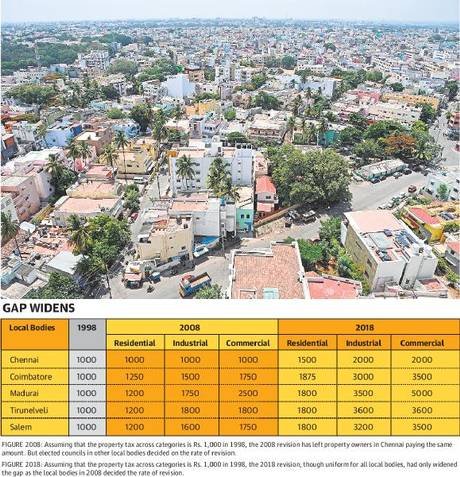 Tax revised by 50% for residential buildings, 100% for others

As of October 29, 2019, the Coimbatore Corporation has received only 25% of property tax it should receive for the current financial year.

A few Corporation officials in the know of the development on the tax revision front indicated that the powers that be had asked the civic body to go slow on collecting property tax not to anger the tax payers, particularly after the revision.

And, prior to that, immediately after the July 1, 2019 revision, the officials cited the revision as the reason for tax payers not turning up to pay.

This left the tax assessees with dues for the two half-years of the last financial year 2018-19 and the first half of the current financial year – the due was the difference between revised tax and the old tax.

The Corporation, at the time of revision, had said the revision would help it net around ₹ 120 crore more a year, taking the total property tax demand for the current year to ₹ 270 crore.

Though the Corporation had hoped to collect the revised tax, the series of aforementioned developments and opposition from tax payers and civil society activists to the rate of revision had resulted in the poor collection.

The opposition was to the rate of revision and not the revision per se, said Coimbatore Consumer Cause’s secretary K. Kathirmathiyon.

The Corporation and other local bodies in the State had revised the property tax based on a direction from the Madras High Court, which had only ordered for the removal of disparity between tax payers in Chennai and others.

The disparity that the Court talked about had its genesis in the 2008 property tax revision, he said and pointed out that after the government’s direction for tax revision, all local bodies except the Greater Chennai Corporation revised the tax.

And, the rate of revision in 2008 was not uniform as it was now. In 2018, the elected councils in the local bodies decided the rate.

“What the State Government had done was against the spirit of the High Court judgement. After 1998, tax payers in Chennai saw no revision in property tax for 20 years. But tax payers in other local bodies saw tax revision in 2008 and for the last 10 years have been paying more.”

And, by uniformly revising the tax now, the government had only widened the gap, he reiterated.

If the State Government did not reconsider its stand by revising the rate of revision to remove the discrimination among tax payers, the Coimbatore Consumer Cause would have little choice, but to move the court for contempt, he added.