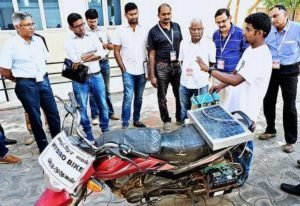 At a room on the first floor of a building in the Dr. G.R. Damodaran College of Science, many students are busy with their laptops working to find out solutions for problems placed before them by the organisers of the TiE Hackathon 2018.

They are explaining to the Hackathon jury about their project – a smart bin. Sensors attached to the bins alert civic body officials on how full it it is and that the time has come to empty it. Pravin says the sensors send out the alert when the bin is 80% full.

On reaching the spot, the civic body officials can use their mobile phones to manoeuvre the bins so that it empties the trash into the collection vehicles.

The programme that controls the sensors and runs using artificial intelligence also reads how often bins get filled and this way the civic body can plan its conservancy operations.

Mr. Murugan, who demonstrated a ride on his vehicle to the jury, had also driven it from Madurai to Coimbatore using four litres of water.

There were nearly 250 participants including the Harikrishnan siblings and Mr. Murugan who competed in 100 teams at the TiE Hackathon 2018, which was held on Saturday and Sunday.

The organisers gave the first prize to Bharath Nair and Steve Paul of Stanes ICSE School, second prize to Rohit VL, Varun Vinayak and Vasudevan of Sri Krishna institutions and the third prize to Danush Ravichandran and Abinav Sudharshan of Bannari Amman Institute of Technology, Sathyamangalam.

TiE, Coimbatore, president G. Karthikeyan says the organisers had given civic issues as the broad topic for the teams to work on but a few chose to work on the problem statements they took them with.

A release from the organisers said the participants who included professionals, college students and also school students had worked on the theme, ‘Harnessing code to solve civic challenges’.

Benzi Mathew, partner and vice-president, SAAMA Tech, a U.S.-based big data and analytics provider, inaugurated the programme on Saturday. The release said Mr. Mathew spoke of the importance of such hackathons in finding solutions to problems the society faced.

Mr. Karthikeyan urged youngsters to take up responsibility to find solutions for challenges faced by the society by using technology to provide solutions.