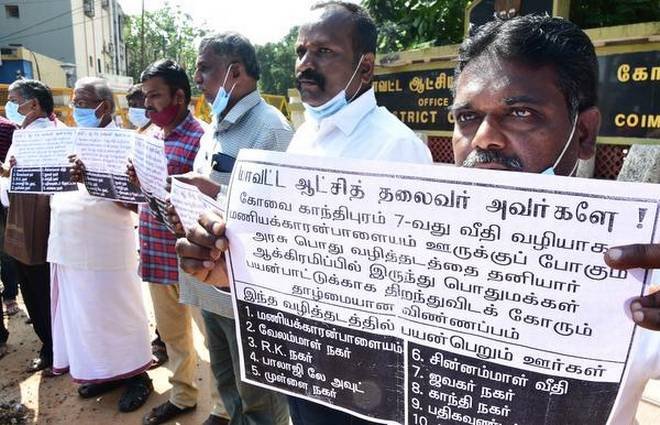 Coimbatore Members of the Tamil Nadu Jallikattu Ilaignar Peravai on Monday sought the district administration’s permission to participate in the jallikattu event scheduled to be held in the district on January 9.

While denying permission, the Peravai members also tore away their application, the Jallikattu Ilaignar Peravai members alleged and appealed to the Coimbatore district administration to grant them permission to participate in the traditional sporting event.

The Coimbatore north unit of Viduthalai Chiruthaigal Katchi (VCK) has urged the district administration to remove encroachment on Panchami land in Chikkarampalayam village in Mettupalayam taluk and distribute the land to landless Dalit families.

In a petition, the party’s district secretary P. Siddharthan said despite repeated petition the local Revenue Department officials had not removed the encroachment. The party said that in its estimate about 1,500 acre Panchami land in Mettupalayam taluk was under encroachment and not used for Dalit members’ benefit.

The administration should look into the issue, evict non-Dalit encroachers and redistribute the land among Dalit members, it added.

Residents of Jawahar Nagar, off Thandal Raman Street, in Ward 44 on Monday urged the district administration to remove encroachment on a road in the locality. In their petition, the residents said an individual had forged a title deed to occupy the road. Ten years after the encroacher had obtained a stay on eviction, the Madras High Court had ordered the eviction to be removed. The court also cancelled the title deed that was given for the encroachment.

Notwithstanding the court order, the residents said they were yet to get justice from the administration. The encroacher continued to enjoy illegal possession and had constructed a compound wall. As a consequence, their access to the main road had become difficult.

In a petition, the gym trainer G.R. Jalendran said the gym that was functional for nearly 50 years was moved to the land next to the school in 1985 after the then Corporation officials felt it was unsafe to store equipment in classroom and necessary to stop the misuse of the land as an open urinal.